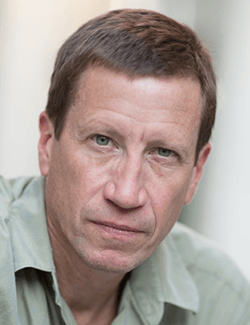 Robby Merritt (Mr. Oxenby) has been performing in Raleigh since his freshman year at NC State in 1984. He appeared in several college productions at Thompson Theatre and TIP before teaming with Kurt Benrud and Pequod Productions for his favorite role as Rosencrantz in Rosencrantz and Guildenstern Are Dead in 1995. He was sporadically active in the 90´s, ¨retiring¨ to be a stay home dad in 1998. Returning to the stage in 2016, he´s performed with Cary Playwrights Forum, Odyssey Stage, and Cary Players, where he last appeared onstage as John/Elvis in Four Weddings and an Elvis in 2018.

Robby is thrilled to be working alongside this wonderful cast and looks forward to more appearances on the TIP stage in the future. He is the VERY proud father of twins Olivia and Vanessa, and the dad-person of Gus, his dog. These are the lights of his life. Enjoy the show!